I had some reservations about using these intensely

personal phenomena as the subject of a photographic study.

At the same time, roadside memorials reside in

extremely public space. It is a nearly universal

feature of such memorials, that they face the highway.

As private as they are, they clearly evidence the

will be seen by a passing stranger.

descanso // dez-cahn-so // noun. A roadside memorial or marker that commemorates a site where a person died suddenly and unexpectedly. 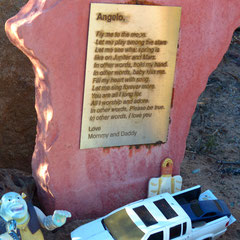 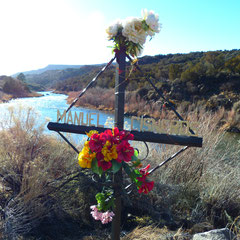 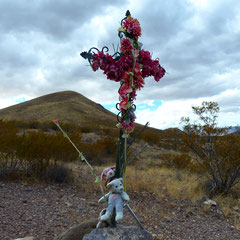 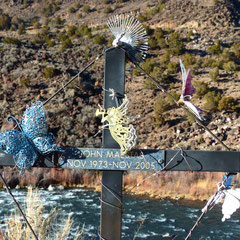 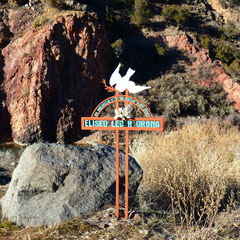 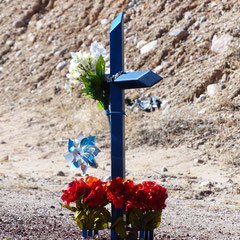 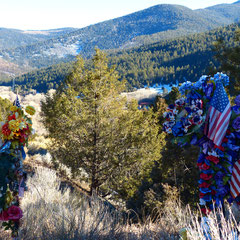 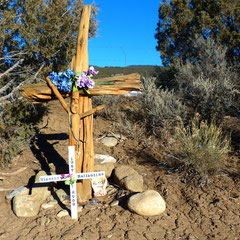 Descansos do not necessarily mark the place where the person died. Rather, it may indicate that an accident occurred at or near the site, but the person may have died elsewhere, such as in the hospital.

Nor, for that matter, do Descansos necessarily indicate a car crash or vehicle death. One was recently erected near Silver City, for example, for a woman who was stabbed to death at that location. Others---such as a large concrete structure between Albuquerque and Los Lunas---are in place for highway workers who were hit by a motorist.

Throughout the year, many Descansos are tended to by friends or family members of the deceased. This might be to clear weeds or debris at the site, or even to add a new coat of paint.

Some memorials are also decorated and spruced up for the holidays, with hearts for Valentine's Day, rabbits or baskets for Easter, trees or ribbons for Christmas, or birthday balloons. 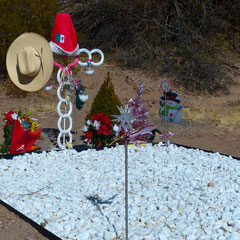 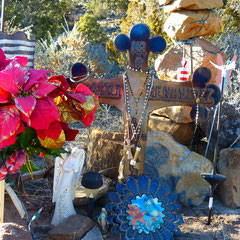 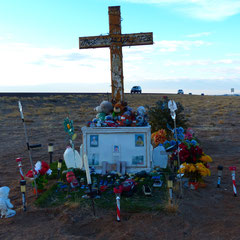 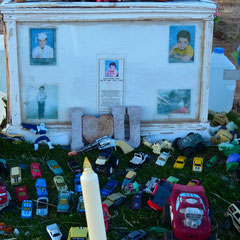 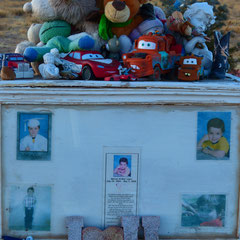 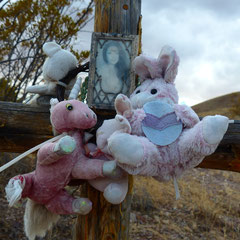 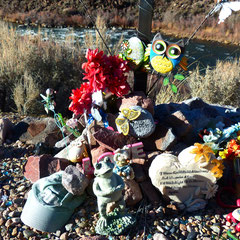 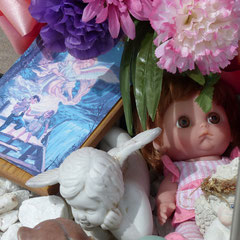 In New Mexico, it is a criminal offense to damage a Descanso, and family notification is required before a memorial is removed.


A]    A person shall not knowingly or willfully deface or destroy, in whole or in part, a Descanso, also known as a memorial, placed alongside a public road right of way to memorialize the death of one or more persons.

If a highway project requires that a Descanso be removed, workers in New Mexico will survey the marker's location so they can replant it in the exact original location when the work is done. Crews often store the Descansos in secure construction sheds while maintenance is being done to the highway.

Descansos are often controversial, but they are universal. It is common to see them in Mexico and many parts of Europe, for example. There are even underwater shrines, the most popular being off the coast of Italy, Florida, and the Bien Unido Barrier Reef in the Philippines.

Increasingly, we are starting to see more Ghost Bikes. Here, a bicycle is painted all white and situated near the crash site where a cyclist was hit or killed.

The first Ghost Bikes were created in St. Louis, Missouri in 2003. Currently, there are over 600 Ghost Bikes in over 200 locations throughout the world. There is even a website: www.ghostbikes.org

Obviously, the power of roadside memorials derives from

the fact that they remind us of our mortality---and, perhaps

more significantly, of the mortality of those we love.

Roadside memorials are so effective at this, because they

confront us with the reality of death as an actual event

at a particular time.