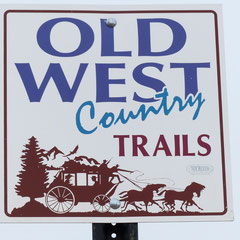 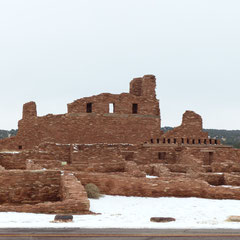 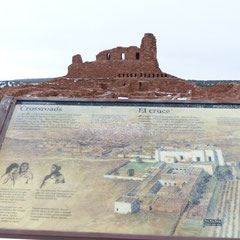 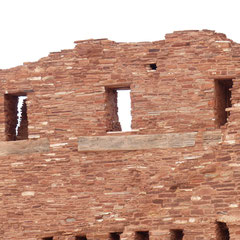 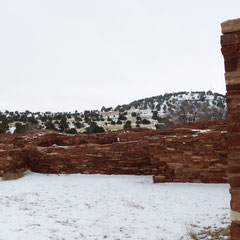 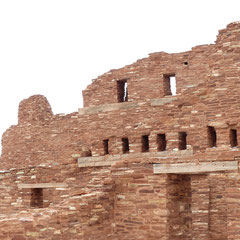 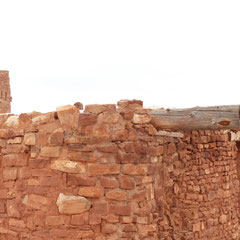 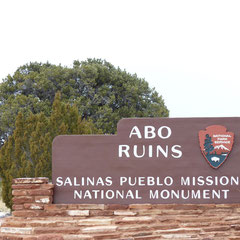 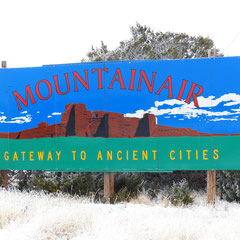 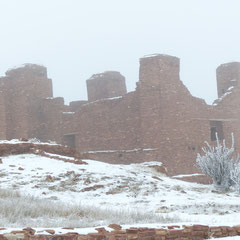 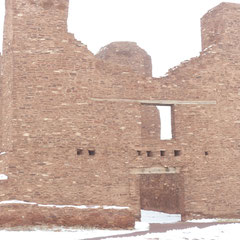 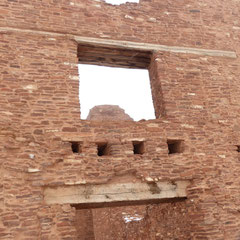 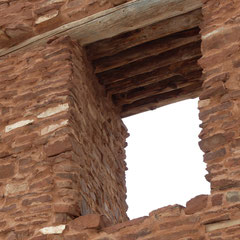 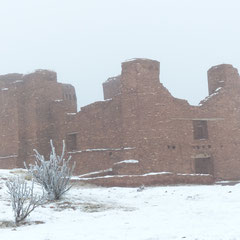 The Salinas Pueblo Missions are located a little more than an hour southeast of Albuquerque. Their location is fairly remote, as the roads that take you there are not ones you would typically find yourself on as a visitor to New Mexico. Because of this, the majority of people who visit these ruins do so by accident. That was certainly our experience in 1993, when we did a two-week driving/camping trip through New Mexico and Arizona.

On that trip, it was close to 115 degrees F when we drove through White Sands National Monument. We camped in Carrizozo that night, where the temperature was around 52 degrees. The next day, our goal was to drive to a campground along the Rio Grande in Bernalillo.

Heading north on State Road 54, we zig-zagged along the even narrower, State Road 58. Soon thereafter, we were at Gran Quivira (also known as Las Humanas), the largest of the three Salinas Pueblos. This was an unexpected detour, but one that made for an incredible experience and great memories. And we still made it to Bernalillo that evening.

On an expedition to investigate the Salinas district in 1853, Major JH Carleton came upon Abo' at dusk. "The tall ruins," he wrote, "standing there in solitude, had an aspect of sadness and gloom ..... The cold wind ..... appeared to roar and howl through the roofless pile like an angry demon."

Carleton recognized the structure as a Christian church, but did not know that the "long heaps of stone, with here and there portions of walls projecting above the surrounding rubbish," were the remains of a large pueblo.

History of the region

By the 900s, substantial Mongollon villages flourished in this region. The dwellers practiced minimal agriculture, supplemented by hunting and gathering. They also made a red or brown pottery, lived in pit houses, and later, in above-ground 'jacales,' a hut with a thatched roof and walls consisting of thin stakes driven into the ground close together and plastered with mud.

Over the next few hundred years, the Salinas Valley became a major trade center and one of the most populous parts of the Pueblo world, with perhaps 10,000 or more inhabitants in the 1600s. Located along major trade routes, the villagers were both producers and middlemen between the Rio Grande villages and the plains tribes to the east. They traded maize, pinon nuts, beans, squash, salt, and cotton goods for dried buffalo meat, hides, flints, and shells.

The Salinas pueblo dwellers were an adaptable people who drew what was useful from more advanced groups. But strong influences from the Zuni district, the Spanish explorers, and deteriorating relations with the Apaches to the east radically altered pueblo life. In the 1670s, the Salinas villages were abandoned, and their peoples dispersed.

Soon after Spain had conquered and colonized Mexico, tales of great wealth to the North drew explorers to New Mexico.  Coronado's expedition in 1540 failed to turn up the fabled land of Quivira, although the name and story lingered. In 1598, a party led by Juan de Onate came to New Mexico to start a permanent colony. He called salt---which was abundant in the area---"one of the four riches of New Mexico" (the other 'riches' failed to materialize). The Native peoples would fill barrels with salt, which were sent back to Spain via Mexico.

In the old world, salt was once so valuable that it was used for money. In the Americas, it was also one of the most important items of exchange, providing a livelihood for many Indian villages.

Eventually, cultural conflicts and natural disasters devastated the Salinas pueblos. There was increasing conflict with the Apaches, and in the 1660s and 1670s, a widespread drought and famine killed 450 people at Gran Quivira alone. Recurring epidemics further decimated the population and the pueblos and missions were abandoned during the 1670s.

There are three main Salinas Missions established as National Monuments, west, north, and south of Mountainair. Abo', the first of the Missions if you are coming from the west, is 77 miles southeast of Albuquerque. Mountainair is nine miles east of Abo' and the other two Missions are: Quarai, eight miles to north, and Gran Quivira, 25 miles to the south.

At each site, only a small portion is excavated, refurbished, and accessible to the public. Comparatively, there are more structures to see at Gran Quivira than the others, but what is visible at Abo' and Quarai is impressive. Unlike a lot of historical sites in the Southwest, you can walk among the ruins, entering what is left of rooms and chapels.

You can visit any or all of the Missions and there is no fee for admission or parking. The main Visitors Center is located in Mountainair, where you can obtain maps/brochures, purchase tourist-fare, and see exhibits of artifacts. You do not need to go to the Visitors Center, however, before driving to the Missions.

As noted in the Petroglyph section of this website, there are numerous petroglyphs scattered throughout the Salinas Valley. Many of them are located on private land, however. In terms of the Missions, the largest collection of petroglyphs is at Abo'. You can arrange a tour to see these, but you must do so in advance, as you must be accompanied by a ranger. You can arrange for a tour by contacting the main Visitors Center (505-847-2585).

These Missions can easily be seen as a day trip from Albuquerque, and perhaps even Las Cruces if you leave early enough and don't mind a lot of driving. You can't camp at the Missions, but there is camping at the Cibola National Forest or Manzano Mountains State Park, both to the northwest of Mountainair.

Mountainair is a small town---more of a village---and there aren't a lot of services. I only saw one gas station, one cafe, one hotel, one motel, and no grocery stores. There are a few shops on the main street through town, but there isn't a lot to see or do there. I therefore suggest that you bring food and water with you.

Granted, you probably won't be visiting these ruins in the snow, but they are spectacular to see whenever you go. These photos were taken in early December 2013; the Rangers pointed out that I was the only visitor on this day.