While the boundary between Las Cruces and Mesilla is somewhat blurred, there is a distinct feel to this little town that used to be called "no man's land" before it officially became part of the United States.

Mesilla retains its feeling of Old Mexico, offering visitors a look into New Mexico's unique past. 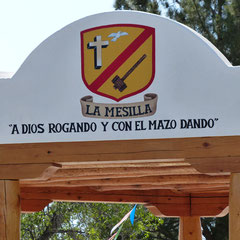 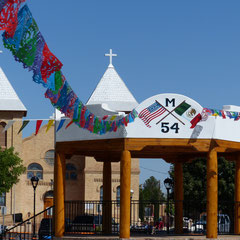 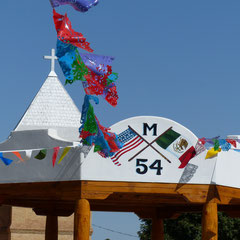 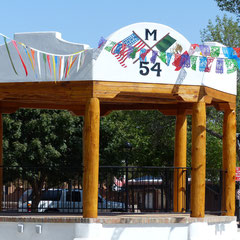 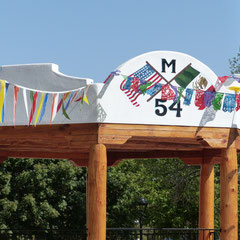 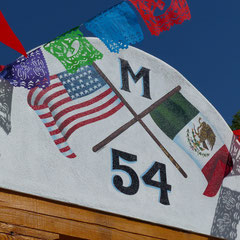 At the time Mesilla was founded, the population of the town was concentrated around the Plaza for defense against Apache raiders, who were a constant threat to the settlement.

The year after Las Cruces was founded, another group of Dona Ana residents established Mesilla, a few miles to the west, on the Mexican side of the Rio Grande. Although the two appeared to be kindred villages, Mesilla was a Mexican town, founded by families who looked to the Catholic Church for spiritual authority and the Mexican government for political leadership.

Here, in Mexican territory, the settlers believed they would find a haven from land-hungry Texans, the United States government, and Apaches. They were to be proved wrong on all accounts.

Overlooking the Mesilla Plaza is the Basillica of San Albino [formerly known as San Albino Church], one of the oldest Missions in the Mesilla Valley. It was established by Order of the Mexican government in 1851 and the current bells date back to the early 1870s. The pews were made in Taos of Philippine mahogany.

The church was named for Saint Albin, a medieval English bishop of North Africa, on whose day an important irrigation ditch from the Rio Grande was completed.

The residents of Mesilla witnessed the end of Mexican rule when the American flag was raised over the Plaza on November 16, 1854. What is known as the Gadsden Purchase (or Treaty) was an agreement between the United States and Mexico, in which the United States agreed to pay Mexico $10 million for 29,670 square miles of Mexico that later became part of Arizona and New Mexico.

While the Treaty of Guadalupe Hidalgo formally ended the Mexican-American War, tensions between the governments of the United States and Mexico continued to simmer over the next six years, as each claimed the Mesilla Valley as part of their own country.

Another less colorful event that occurred on the Mesilla Plaza was a political riot in 1871, where Republicans and Democrats met after simultaneous political rallies on the west side. Fighting went on, resulting in several deaths and injuries. Nine people died and as many as 50 people were injured in the riot. Even the town doctor was shot in the hand while trying to help the wounded.

Ultimately, no one was ever charged. The riot caused many to resettle elsewhere. About 40 Mesilleros---including Apolonio Barela, who had fired the first shot that set off the riot---left the town and headed south to Mexico.

Even Billy the Kid visited Mesilla.

In 1880, Patrick Floyd Jarvis Garrett became sheriff of Lincoln County. His first duty was to bring in Billy the Kid for killing Sheriff Matthew Brady. Billy the Kid was captured by Garrett at Stinking Springs on December 23.


Tried in Mesilla, Billy the Kid was found guilty and sentenced to death. Judge Bristol reportedly told Billy that he would hang "until you are dead, dead, dead." Billy the Kid laughed, saying back to judge, "you can go to hell, hell, hell."

The Plaza was listed on the National Register of Historical Sites in January, 1982.

Today, the population of Mesilla hovers around 2000. In 1860, Mesilla also had more than 2000 residents. By comparison, the numbers for other cities at the time were:

Today, Mesilla has a total of 5.4 square miles and sits at 3,881 feet above sea level. Long growing seasons and mild winters allow crops to be produced year round. Major crops include alfalfa, pecans, cotton, cabbage, lettuce, onions, and of course, chile.

While this goes on, the Mesilla Plaza remains a home to many cultural and historical activities, including: 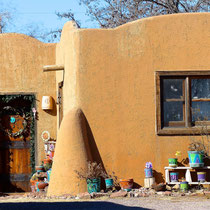 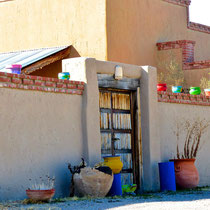 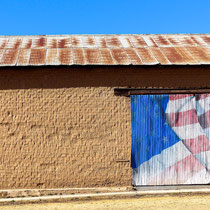 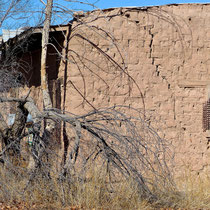 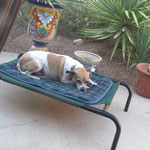