From the earliest of times, containers and vessels have been adorned with designs and images of symbolic meaning. The act of decorating such containers as vases, cups, cauldrons, amphora, and pots has had an almost religious significance, suggesting that the container and the content are symbolically related. In this sense, the decoration of water tanks is no different. 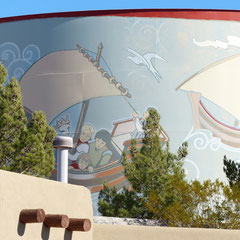 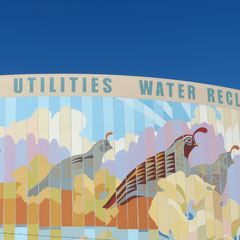 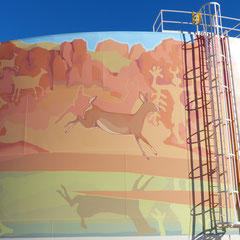 In a state such as New Mexico, it is common to see water storage tanks of various sizes on ranches and in towns. While the tanks serve as a source of emergency water for some communities, it is often the sole source of water for others. In December 1951, for example, one of these tanks in Tucumcari failed (due to faulty welding) and several lives were lost.

When you drive around southern New Mexico, you will notice that the water tanks are much larger than some of those up north. What you will also see is that a good number of these tanks are painted in great detail. No, I’m not talking about a painting of a cactus or roadrunner here and there; I’m talking that the whole tank is painted as a mural.

In what amounts to a 32-foot-tall canvas of steel—capable of holding two million gallons of water—these require upwards of 60 gallons of paint. While they can loosely be referred to as ‘folk art,’ the images and scenes captured on these tanks portray the rich and diverse history of southern New Mexico, to include its early explorers; the Native people who were the first inhabitants of the area; plants that dot the landscape; and of course, the life-blood of this region, water! 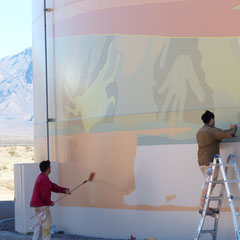 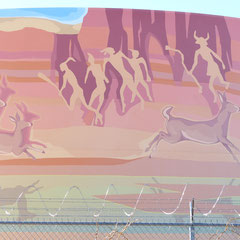 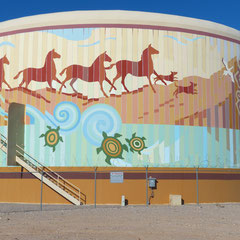 The painting of these murals is a major undertaking, yet surprisingly, most of them are completed in well under a year’s time. The murals are painted in shades of earth, sky and water, and because they are painted on a round surface, the murals change as you walk or drive around them.

The majority of these water tanks are incorporated into the communities they serve. Thus, some are literally surrounded by houses, while others stand of the outskirt, but never far from population. Unless you’re looking for them, it’s easy to miss seeing some of these tanks and murals, as they blend into the surrounding landscape. 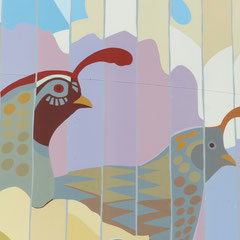 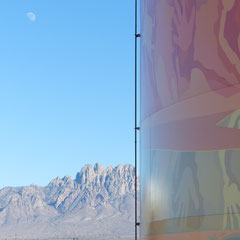 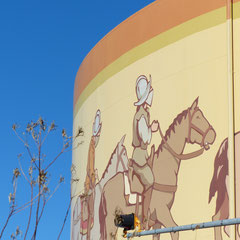 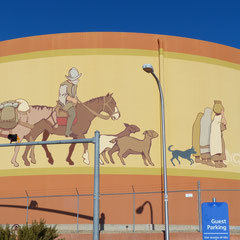 In southern New Mexico—primarily Las Cruces—the majority of the water tank murals are painted by local artist, Anthony Pennock (and members of his family). The tools used to create these murals can be as large as a brush needed to paint or wash the side of a ship, while others are the size you are used to dealing with when you paint a fence or bedroom.

The first tank completed by Pennock is the one you see off the I-25 freeway, at the Lohman exit, just north of the University. Pennock painted this mural for the Las Cruces Chamber of Commerce in 1972 at the age of 17. He worked at night using an opaque projector to transfer the images onto the tank. The mural was completed in six months and depicts the Conquistador’s trek across the Jornada del Muerto (journey of death).

At the dedication ceremony for this mural, it was noted:

... this is a land of many cultures, rich with history,

where cultures intermingle [and where] strong men

and ideas are born.

In 1992, when the tank required routine cleaning, Pennock was commissioned to paint a new mural, which is the one you see now. This mural—titled The Entrada—depicts Don Juan de Onate bringing the first European settlers into this land. 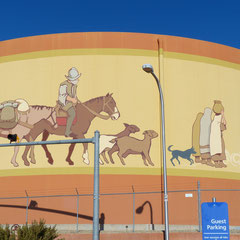 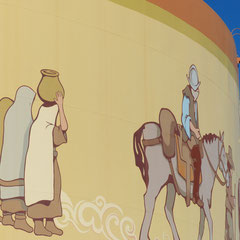 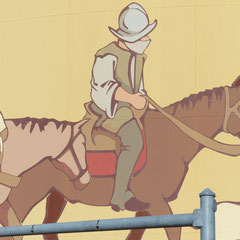 In addition to the murals Pennock completed in Las Cruces, there are also examples of his work in Truth or Consequences, one hour to the north on I-25. One of these tanks, completed in 1991 and titled Journey to the Sacred Springs, is a tribute to the healing hot springs of the area, sacred to the Apache Indians. The mural is bisected by vertical lines resembling basket weave. Painted on one side of the tank is a deer head mask. On the other are three Apache Indians on horseback, above three turtles.

Pennock’s work can also be seen in other places in Las Cruces, including the Dona Ana County Courthouse; the Rio Grande Bridge on Highway 70; and on a silo in Las Mesa (south of town).

Pennock’s most recent mural—completed in January 2014—depicts a Native American deer hunt. A stylized canyon, a rain-filled arroyo, armed hunters and deer, frozen in mid-bound, all decorate the tank’s surface. According to Pennock, some of the designs were inspired by the nearby Broad Canyon petroglyphs.

Pennock is not the only artist to paint murals on Chihuahuan Desert water tanks. Royce Vann, a former local artist, was commissioned by the Moongate Water Company to paint two tanks in the town of Organ, 14 miles northeast of Las Cruces on Highway 70. One of these is the Space Mural, which highlights New Mexico’s role in space exploration. Vann’s work can also be seen in the lobby of the Naval Air Warfare Center at the White Sands Military Base. Students from Silver City also produced three water tank murals on Highway 180 (the highway which takes you from Deming to Silver City), which incorporate 33 different Mimbres designs.

WHERE TO FIND THEM

You will notice these tanks right before the Lohman exit off I-25 in Las Cruces, if you're heading south. For a closer look at this one, turn right on Lohman off the freeway, right on Walton, and right on Griggs. You will see the tank right in front of you.

If you turn left on Roadrunner off of Lohman, continue north to Mellenium Street. There is a nice mural on your left, but it is surrounded by homes on three sides, which makes it difficult to walk around and see all of it.

To see the most recent mural, turn left on Sonoma Ranch Road off of Lohman. Continue to Sedona Hills Avenue and turn right. The tank is at the end of the road. You walk the perimeter of this mural, but watch for cacti (all seasons) and snakes (in the summer).

You will also find these murals in other parts of the city. Keep your eyes open and you will spot them. Do note that the fenced-in property where the tanks are located is private, so even if the gate is open, don't go inside.

To see the murals in Organ, head east on Highway 70 from Las Cruces for 12 miles. You will see the Space Murals on your right, near the science center.