For the most part, the santeros led holy lives; it was thought that

the more religious the santero, the more powerful his saints.

There simply were not enough priests to minister to the devoted

in this large geographic area.

To understand New Mexico history, we have to look at the role devotional art held for the people. This is art that has been important throughout the centuries, continuing to the present day. Its imagery is pervasive throughout New Mexico, and the meaning it holds today is just as strong as it was in the 1500s. For the information that follows, I credit Larry Frank, author of A Land so Remote [2001]

Spanish explorers first came to New Mexico in the 1530’s, but they did not find the Seven Cities of Gold they thought existed. They returned to Spain, but in 1598, Juan de Onate commanded an expedition, which brought them back to New Mexico. The Espanoles, as the original Spanish settlers of colonial New Mexico were called, lived in accord with cultural traditions recreated from the memory of Catholic Spain. Because the inhabitants were so isolated, they would reenact old religious dramas, sing traditional hymns, and say prayers, living an old world lifestyle structured very much like traditional Spanish village life of the sixteenth century.

The religious art that embodied the spirit and aspirations of New Mexico Catholics include painted and sculpted images of celestial beings—divine, angelic, and human—that adorned churches, chapels, and homes. This art formed a vital part of Hispanic religious tradition that harkened back to the Middle Ages. The early settlers maintained memories and associations of the religious art in Spain or New Spain, much of which reflected an already outmoded sixteenth-century provincial style.

Once every three years Franciscans and Hispanic merchants from the colony sent trade goods to Mexico City in exchange for supplies. Occasionally, the caravans returning to New Mexico contained a few santos (meaning, ‘image of a saint’) from the workshops of Mexico. However, the small supply of imported santos could not begin to satisfy the desire of the Hispanics for these religious objects.

The santero gathered his pigments from various sources. He used many local clays and minerals, which provided handsome hues of blue, yellow, red, brown, and green, and he used carbon soot and burned organic matter for black. He boiled native plants, barks, roots, and flowers to make reds, yellows, and browns. Finally, with homemade brushes, he applied his paints and added homemade piñon-sap varnish to waterproof the whole.

During the Pueblo Revolt of 1680—a province-wide rebellion in which drove the Spanish out of New Mexico—all of the religious objects in the province had been destroyed. Then, in 1692 and 1693, the Spanish, led by Don Diego de Vargas, returned to New Mexico and reconquered the Pueblo Indians. Soon, the new settlers began building towns and villages, each with a chapel. During this period of reconciliation, the Spanish and Pueblos formed an economic and political alliance to protect the province from attacks by Plains and other nomadic Indians who periodically raided New Mexico.

In the first half of the eighteenth century, some religious art began to appear in households and churches of the province, a few locally crafted. Until this time, religious artifacts had been primarily imported from Spain and Mexico. New Mexican religious art at that time consisted primarily of paintings on hides and skins, some fashioned by local artisans and the clergy, and oil paintings on canvas imported from Mexico. In addition to producing religious images on hide, the Franciscans also influenced the creation of wooden santos by the first known santeros. The santero deviated from the traditional Spanish style by painting on wooden boards instead of on canvas.

The demand for santos stimulated a continual succession of native santeros who began to produce images around 1790 and whose works were essentially free from the older Spanish baroque style. Their interpretations were made within the context of the social, cultural, and spiritual influences of New Mexico. These regional santeros established a decidedly unique New Mexican style of santo. At that time, there numbered perhaps seven thousand households, each supplied with at least one santo and possibly two or more. Each village, with its church, chapel, and morada probably had dozens. Thus, it is likely that New Mexicans produced well over ten thousand santos during this era when santo making was a thriving cottage industry.

As Christians, New Mexicans did not worship the saints such as Mary, Michael, or Anthony as deities; they revered them as beings who served as intermediaries and means of communication between individuals and God. However, besides being regarded as heavenly intercessors, the saints had personalized functions or powers ordained by God that they could use at their own discretion. Thus, the saints could be petitioned in case of special needs.

The popularity of specific saints depended upon their function as intercessors, benefactors, or protectors; to alleviate some grave and constant need, to offer something hoped for, or to protect against something feared. To alleviate a sense of powerlessness, they turned to the celestial hierarchy to help them realize their hopes and protect them. Thus, a santo is not only an aesthetic object to adorn a home; it is also a utilitarian object with a particular function:

With changing times, certain saints have taken on new meaning

in the lives of the population. For instance, Saint Liberata has

come to stand for women's liberation to some, and Saint Anthony

'good husbands.' The region is no longer as dependent on

the isolated small farm as it once was, so the people tend to

rely less on San Ysidro, although he is still a popular

At baptism each Catholic took the name of a patron saint. The godparents, rather than the parents, often chose the namesake. Since each of the saints had distinctive powers, the Hispanics treated them as valued friends and even as members of the extended family. They often talked to the saints as they would speak to members of the family, and they instinctively involved them in family affairs. A villager would take the figure of Saint John the Baptist out on June 24, for example, to bless the irrigation ditches. Today, Hispanic villagers still carry a statue of the patron saint around the town during the annual fiesta.

These New Mexican santos constitute the only monumental religious art that European America can claim as part of its own heritage. Nothing comparable exists from New England, as the Puritan forefathers forbade the creation and use of most religious images.

Although popular and housed in churches throughout the territory, santos weren't necessarily endorsed by Catholic officials, who often derided their folksy character. "These objects are deformed and indecent, never to be exposed to public veneration," quipped a Franciscan inspector who toured the territory in the early 19th century. Still, the works endured and have become a key element of modern Hispanic American art.

One of my great joys as Archbishop of Santa Fe is to visit with the different pueblos on their feast days. The day begins with a beautiful mass in the pueblo church followed by dancing and honor given to the saint. The image of the patron saint is carried in its procession through the village to the place of honor in the main plaza.

This quote from Archbishop Sheehan is included in the 2004 book, Saints of the Pueblos by Charles Carrillo. In the Introduction, Carrillo writes:

The historical context in which the saints were chosen for missions has been lost. It is believed that each saint was likely chosen for any of several reasons, including the proximity to a specific date, the patron or devotion of the founder of a mission or the Franciscan friar, or the usurpation of a pueblo ceremony.

The acceptance of Christianity by the pueblo peoples is complicated and controversial. Many Native Americans in New Mexico actually adhere to two different religious; their Native practices and Catholicism. The influences of these beliefs and rituals might be very different, but each are of equal importance.

Because of this, you will see "Christian" representation in a lot of Native American art, and you will definitely see its imagery if you visit the churches on the pueblos or if you attend any of the ceremonies.

These Retablos, painted by Charles Carrillo have been prepared with homemade natural pigments, a hand-adzed pine panel, and piñon sap varnish. What you see here are the saints of the Acoma, San Juan, Santa Ana, Zia, and Gran Quivira Pueblos. 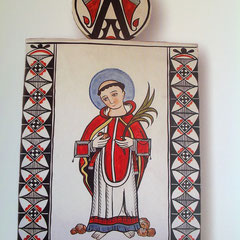 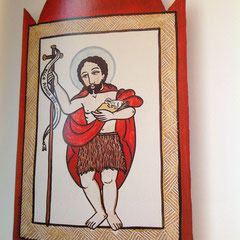 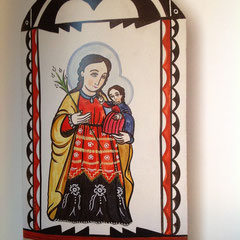 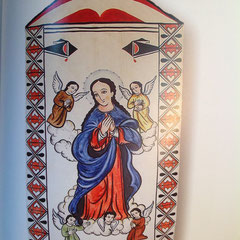 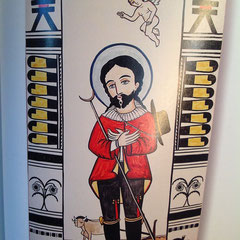 Below are the kinds of Retablos you might find in a New Mexico home. Retablos such as these can be purchased at Winter or Summer Spanish Market in Albuquerque and Santa Fe. The artists of these include John Gallegos, Kathryn Hettinga, and Krissa Lopez-Moya. 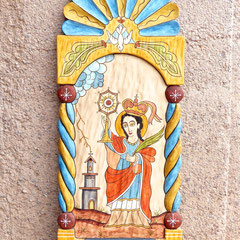 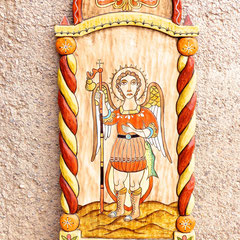 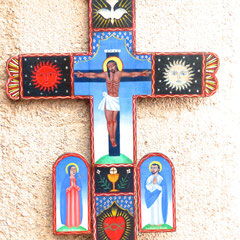 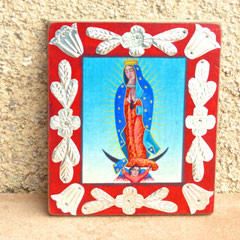 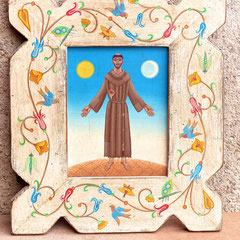 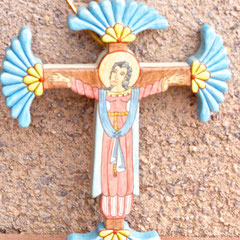 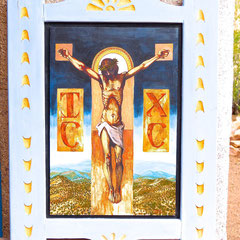 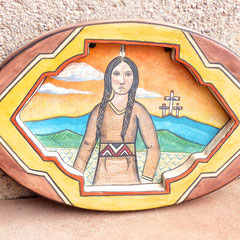 WHERE TO SEE SPANISH ART IN NEW MEXICO

Albuquerque Muesum of Art and History